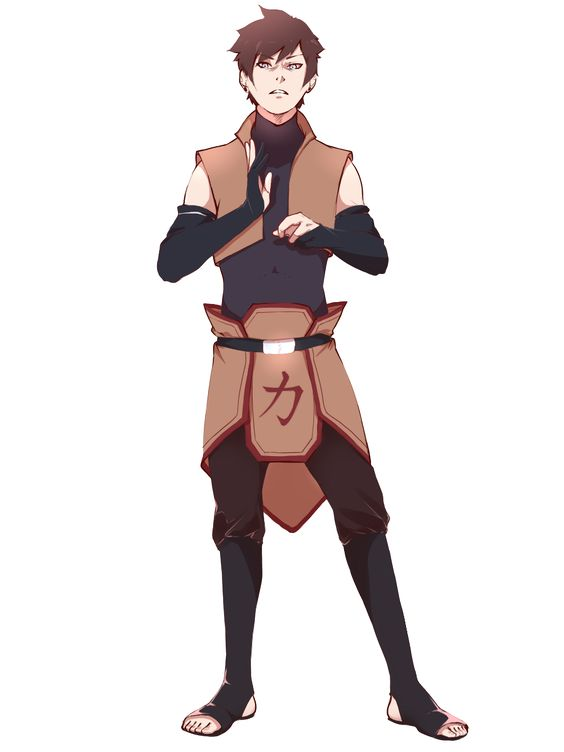 [Move.] General Information Age: 14
Gender: Male
Height: 5'5
Weight: 105 Lbs
Physical Features: Kinomichi stands even with his peers at five feet five inches with a lean physique. Covering his entire body, from his feet to the top of his neck (besides his groin), are hard red scales. These scales are a side effect from the experiments he suffered underneath his father. The scales are a dark ruby; Kinomichi covers his entire body with long sleeves or bandages to hide the scales from public view. His once onyx-colored eyes have also been altered by the Kirin's DNA, becoming lime green in color with bar-shaped pupils similar to a horse; thankfully the alteration has had no effect on his Shōgō-zumi. Over his bandages he wears a black body suit that covers him from neck to toe that tucks into black combat sandals. He wears a pair of black trousers and brown half vest over the body suit along with a short brown kilt held up by a belt emblazoned with the Iwagakure symbol. a Two supply pouches are connected to the back of the belt as well.
Personality: Kinomichi is a very aloof person. He prefers not to talk unless required and instead uses his face and body language as means of conveying what he feels. He is sociable and more exuberant with those he sees as friends. Although quiet, he is a staunch patriot of Iwagakure no Sato and devotes himself to its current and continued protection. Usually quiet, the man turns into a fierce fighter when needed. To compare Kinomichi to a smoldering ember would be apt; suppressed and concealed but able to turn into a raging inferno at a moment's notice. Battle Information Village: Iwagakure no Sato
Rank: Genin
Equipment: Companions: (0/1)
Primary Affinity: [Katon] Abilities and Concentrations Jutsu
NinjutsuShow
KatonShow
*Katon • Fireball
D-Rank Ninjutsu
After performing the correct hand seals the user draws in a deep breath before exhaling out a 1 foot diameter fireball at the opponent. It travels up to 10 meters away at a speed of 6 and a strength of 4.

*Katon • Torch
D-Rank Ninjutsu
After performing the correct hand seals the user will exhale a small ball of flame directly in front of them. The ball lights up the surrounding area in a 5 meter radius and requires 5 or more Strength to destroy. Unless destroyed, it will stay locked in it's location for 5 posts before fading.

*Katon • Flame Jet
D-Rank Ninjutsu
After performing the correct hand seals the user draws in a deep breath before exhaling out a cone that is up to five meters long and three meters wide at it's base. The cone travels at a speed of 6 and pushes with a strength of 4.

*Katon • Flame's Shadow
D-Rank Ninjutsu
After performing the correct hand seals, the user will create a copy of themselves out of katon chakra. The clone will be able to move with the stats labelled below, while also exploding with the force of a single exploding tag upon death into a burst of flames. The clone will only last for 3 posts. *Katon • Heated Blade
D-Rank Ninjutsu
By channeling katon chakra into a metal weapon or blade, the user will cause it to grow hotter and cover the blade in flames. The imbued weapon will be able to carve through defenses of 5 or less strength with ease.
TaijutsuShow
Flames of HatredShow

Flames of Hatred:
Flames of Hatred Style
This style comes from the ferocity of the Fukusha as they allow the Flames of Hatred to burn behind their eyes, while they portray a cold stoic outer layer that creates an eerily feel on the battlefield. Their hatred is felt and shown, but it betrays the nature of their calm relaxed movements. This style is usually used to lull opponents in with smooth dodges, and tactical foot placement as they dance around their opponent. Behind the scenes the user is playing a game of battlefield management forcing the opponent to move a way or lull them into placement for their next move. The Fukusha are known for their tactical prowess, and are always thinking 10 steps ahead of their opponent.
Prerequisites: [Close Quarters Combat], and [Perception]

~Flames of Hate • Walking Stance
D-Rank Taijutsu Stance
The Fukusha will pair their feet in an L stance, and have a casual movement to them despite their mind being on edge. This stance is typically used to lull opponents into thinking the user is relaxed as their feet are paired shoulder width apart, and knees slightly bent for immediate leverage when needed. While moving the user will typically keep their body on edge as if to react out of instinct to dodge, parry, or block any incoming attacks. In this stance the user's keep their torso up straight.

~Flames of Hate • Tactile Palm Maneuverment
D-Rank Taijutsu Maneuver
When the user is fighting upclose and personal, they will waive their off hand in the face of their opponent as a distraction while their other hand will perform an underhanded palm strike to the chest. This strike aims to wind them with a blow to the sternum which can create useful openings.

~Flames of Hate • Side Swipe
D-Rank Taijutsu Maneuver
The user will intercept an incoming strike aimed for them, and divert it to the side opposite of the hand they're using to divert. As they attempt to move the opponent around them they will raise their arm on the side they're directing the opponent, and jab a strong elbow to that person's head as an attempt to disorient or land a sturdy face blow. While rudimentary it is still a strong strike as its compatible with most incoming attacks of the physical nature.

~Flames of Hate • Flying Heel Take Down
D-Rank Taijutsu Maneuver
When fighting in close quarters with an opponent, the user will jut an open palm strike at their opponent's nose attempting to disorient the target before spinning quickly on their back heel as they raise their opposite leg high in the air. They will aim to strike and cradle their opponent's head down towards the ground. This move can prove fruitful for creating a wide opening on an opponent as its goal is to disorient, and then bring their opponent's down onto the ground with a strong kick.

~Flames of Hate • Elbow Tackle
D-Rank Taijutsu Maneuver
When moving into an enemies close quarters range, the user will aim to throw their opponent's defensive stance upwards with their free hand as they aim with their opposite elbow jutting it into their opponent's ribcage to knock them down into the ground. This move can be useful when attempting to close the gap and prevent an enemy from fleeing after forcing them into close quarters combat.
History
Historical AccountsShow
Fukusha, Kinomichi was delivered by one of the Fukusha midwives in the wastes of Rock Country within one of the many hideouts devised by his clan. His mother’s body was unable to handle the stress put on it through his birth and died as a result. She had always been a weak woman with a frail body and susceptible to illness. His father, a doctor and scientist within the clan, was forced to raise the boy alone.

As a child, Kinomichi was bounced around various babysitters while his father spent hours, if not days, at his laboratory located deep within the hideouts of the clan. Often handed off to extended family members of the Fukusha, Kinomichi was taught how to be a ninja by his clan. Kinomichi lthough during this time period his body followed a similar path to his mother. The boy would frequently catch colds or become winded quicker than the other children.

Kinomichi took countermeasures for his frail body. Through his father’s connections the boy was able to take medication to mitigate the affects on his body into minor issues. The boy’s time was filled with low ranked missions taken with friends from the clan until finally Iwagakure and the clan were at blows.

Around this time, Kinomichi had not realized it but his father’s work began to move into questionable practices. One day upon visiting the laboratory he had his drink drugged and was moved into a prep room. He had been stripped of his normal clothing and had it replaced with a hospital gown and then heavily strapped down to a bed. Kinomichi was awoken from his predicament by the death throes of a Kirin spirit. On the far side of the room, his father had multitudes of fuuinjutsu carved into the wall where he had proceeded to summon a Kirin spirit from its realm. The Kirin looked like a dragon shaped like a deer with the tail of an ox and a backwards curving horn and covered in dark ruby red scales. Once fully through and in the human world, his father slaughtered the spirit and extracted its DNA. The boy struggled to no avail against his bindings before his father began to splice the DNA of the Kirin into his body. Kinomichi fainted from the ordeal and only came to as a team of Fukusha busted into the lab and arrested the man. Kinomichi would later learn his father had procured the fuuinjutsu necessary to summon the Kirin by a missing ninja.

Kinomichi was wrapped in a towel and taken to be looked over. There his body became accustomed to the new DNA of the Kirin; dark ruby scales began to cover his body and ambient Katon chakra began to leak from him. Further experimentation with the ability revealed Kinomichi had also received the Kirin’s regenerative properties which had cured the frailness of his body. The boy was placed on leave from his duties as he overcame the trauma of being his own father’s lab experiment and the subsequent changes to his body.

Over a course of years, the clan became integrated into Iwagakure no Sato and Kinomichi joined their ranks to return to being an active combatant. Now he seeks to make sure use of Curse and fight against the horrors of his past by committing to the village.
Top
REPLY
TOOLS
1 post • Page 1 of 1