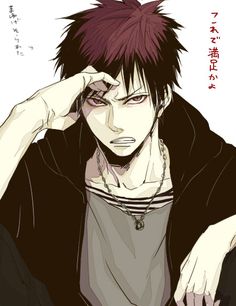 "Survival of the Fittest" General Information Age: 15
Gender: Male
Height: 5'6''
Weight: 246 Lbs (Variable)
Physical Features: Clothing/Accessories: While not made of fabric, Mari rearranges his biomass to resemble a normal attire of clothes to better fit in with society. His most common outfit consists of a grey tunic, dark pants and a pair of white laced shoes, with a dark, hooded zip-up jacket for colder temperatures and rain.

*Raiton • Stun Gun
D-Ranked Ninjutsu
After performing the correct hand seals, the user will channel Raiton chakra to two of their fingers. They will then be able to fire up to three total bullet sized balls of concentrated lightning from their fingertips. These bullets will travel at [Control] speed, but will not have any physical force. Instead, they will apply light electrical burns similar to a sun burn and will apply Raiton's shocking effect.

*Raiton • Sky Spear
D-Ranked Ninjutsu
After performing the correct hand seals, the user will create a 1 meter long rod of lightning in their hand at [Control] Speed. They are then able to launch it at their Strength in a single direction. Upon contact the spear will explode with [Control] Strength. If it has not been launched by the end of the second post it will dissipate.

*Raiton • Galvanic Zone
C-Ranked Ninjutsu
After performing the correct hand seals, the user will seep Raiton chakra in an area around them with a 25m diameter. The user's Raiton will constrict and paralyze jutsu and people who enter it. They will lose -1 Speed per post for 2 posts or until the user ends the jutsu.

*Raiton • Jamming Pulse
C-Ranked Ninjutsu
After performing the correct hand seals, the user emits a wave of electricity from their palm in a single direction. This is produced as a 10m wide line which extends 2m into the air and travels up to 25m from the user at [Control] Speed. The wave will apply the shocking effect and reduce the speed of any living thing it strikes by 3 Speed for 3 posts by electrically interfering with the brain's nervous signals.
BiomassShow
Knife in the Dark
D-Rank Ninjutsu
After focusing their chakra around one of their hands, the limb will restructure itself into a spear-headed blade made of chitin that extends three inches outward. This blade has a strength of [Control].

Assimilate
D-rank Ninjutsu
By focusing their chakra in a damaged portion of their body then coming into contact with viral biomass, the user is able to absorb said biomass to repair their body.

Partial Armor
D-Rank Ninjutsu
By channeling chakra into a single limb, the bust or either side of the torso the user is able to grow a protrusion of muscle and cartilage out of it at a speed of [Control]. This armor may be used as a physical weapon or to defend against damage at a strength of [Control]. It envelops the portion of the body in question with a 2 inch thick coating of biomass.
TaijutsuShow
Living ArsenalShow
Sharpened Onslaught
D-Rank Nintaijutsu
Prerequisites: Knife in the Dark
Making use of their now blade-like appendage, the user will lunge towards their opponent with a downwards slice, proceeding with a quick combination of three more slashes to their body. This may be initiated at a distance of 2 meters.

Brace
D-Rank Nintaijutsu
Prerequisites: Partial Armor
Having enveloped part of their body in hardened flesh, the user will lock their body at an angle to place the armored portion between them and an attack. This serves to reduce damage or even shrug it off.

Discombobulate
D-Rank Nintaijutsu
Prerequisites: Partial Armor
Having enveloped part of their body in hardened flesh, the user will make use of their notions of close-combat to strike the opponent's head with the hardened portion. This serves to damage and stun an opponent when in close quarters.

Avoidance
C-Rank Taijutsu Discipline
Placing faith in their acrobatic abilities, the user has implemented jumping, flipping and overall flinging their own body in a spontaneous manner while in an active fight. This serves to make their attack patterns harder to predict as well as to make the user harder to hit.
History
Historical AccountsShow
On a chilly night in the midst of winter, Mari came into the world. Small, frail and two months before expected he was born to Daiko and Nanako, a couple of Jounin expecting their first-born. Unable to live unassisted, his first two weeks were spent in the hospital having his breathing and heartbeat monitored, as his parents watched on in impotent worry. This would be only the first of many instances where they'd feel their son's particularly thin thread of life tested.
Ironically, it was perhaps for the best that he was raised in a clan of warriors. The constant struggle for power and the general rule of survival of the fittest even among the children forced him to overcome or at least compensate for his natural shortcomings. At six, he was still smaller and weaker than other boys his age, and that was liable to make him a target of darwinism. However, even as a child the blood flowing through his veins demanded submission and urged his rage on to respond with fury at the slightest provocation. Few could match his ferocity and his close family, in spite of his weak health, prided themselves in the Toukai glint of wrath in the boy's eyes. Dilligent, loyal, gregarious, Mari was ready to explore the world and conquer it.
It was only when he reached puberty that his biological make-up began outpacing the power of his will. Disease struck him sooner and harder than any other child his age, he couldn't put on as much mass as he should be able to and his lungs could barely take the same amount of running that was expected of Academy students without sending his little heart into a frenzy. His father advised him to pursue a career in construction, brutal honesty and a sharp tongue dealing blow after blow. His mother begged him, if only through a face contorted by rage rather than tears, to give up his military aspirations before he got himself killed. He powered through on pride alone, however, agreeing to delay his registration into the Academy for one more year to ensure he went in at his best shape.
At thirteen years of age, he stepped into the Academy with nothing but his name and sheer determination. He came from a family of ninja and that was what he intended to become. The first phase only served to strengthen his resolve. Relentless studying and hellbent on absorbing every piece of knowledge like a sponge, the only things that held him back were the fits of rage he'd undergo when being verbally targetted by students from anti-clan families. After this phase ended, his confidence was at its highest, and there was no doubt in his mind that he'd achieve the rank of shinobi. It was when phase two began that reality hit him like a brick. The class-work didn't bother him. It was the fact that he felt as if he would faint just from the slight exercise they were put through. Once more, his pride didn't let him reveal any of his suffering, knowing full well he'd be expelled if found to be concealing injury. Still, the thorn in his side was there and he knew he couldn't hide it much longer. It was by a razor thin margin that he managed to pass phase two with no incidents and the worst was yet to come.
Like many before him, the time had come for him to join his fellow clan members and have himself infected with the flesh-moulding virus that had made them such a force to be reckoned with. It was a moment of great pride for any father, and a coming-of-age milestone for any child. It was a moment of pride and self-affirmation. For Mari, however, it was the moment he realized there were cruel limits to his body, far more than anyone else's. Phase three of the Academy's curriculum was but a week away, and if the virus wasn't enough to kill him, that would sure hammer the final nail in his coffin.
It was there, somewhere between despair and frustrated rage that Chisaki found him. The strange and enticing anomaly, unique even among the Toukai came to see him the night after he'd been induced with the virus. Even in the earliest stages of the infection, death was an obvious inevitabiity. His body spasmed painfully and amidst the fever he could barely tell dream from reality. He couldn't tell if it was from pity or from loneliness or even any other reason, but she offered him a re-do. A clean slate to work with. A body that would never again be plagued by weakness or genetic malfunction. It was with his final breath that he agreed, and it wasn't long before her unique strain had him moving again. Six months later at the age of fifteen, Toukai Mari was awarded his forehead protector and pledged allegiance to the great village hidden in the mist, now far more than just another human.
Username: Crabman
Points: 0/0
Prestige Perks: 0/0
Stat Trainings: (0/75)
Top
REPLY
TOOLS
1 post • Page 1 of 1