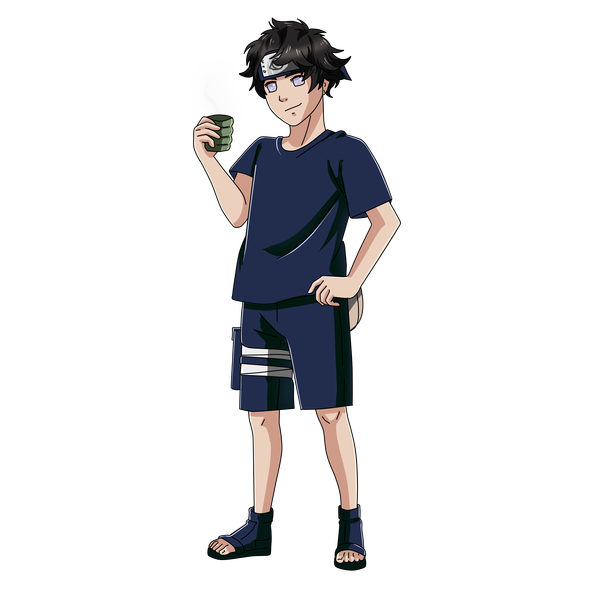 [Inner stillness is the key to outer strength] General Information Age: 12
Gender: Male
Height: 4'11 ft
Weight: 46 kg
Physical Features: Clothing/Accessories: Hato’s typical attire consists of a navy blue short sleeve t-shirt, matching navy blue shorts and black sandals. A ninja pouch is strapped to the back of his right thigh, and his Konoha forehead protector is donned in the correct position. It’s not unusual to find his forearms and shins wrapped in bandages.
Personality: Battle Information Village: Konohagakure
Rank: Genin
Equipment: 15x Kunai in pouch
Companions: (0/1)
Primary Affinity: Raiton Abilities and Concentrations Jutsu
ByakuganShow
~Byakugan: Telescopic Vision
D Rank Ninjutsu
By channeling a small amount of chakra to the Hyuuga's Byakugan, the clan member uses their doujutsu to zoom in like a telescope, allowing them to see much farther away. In doing so, the Hyuuga member is able to see up to 250 meters away as though they were mere feet away. It should be noted that while using their telescopic vision the Hyuuga experiences tunnel vision, making it difficult to see their surroundings. This jutsu can be maintained as long as the Hyuuga channels chakra to their eyes.

~Byakugan: Telescopic Vision
C Rank Ninjutsu
By channelling a small amount of chakra to the Hyuuga's Byakugan, the clan member uses their doujutsu to zoom in like a telescope, allowing them to see much farther away. In doing so, the Hyuuga member is able to see up to 500 meters away as though they were mere feet away. It should be noted that while using their telescopic vision the Hyuuga experiences tunnel vision, making it difficult to see their surroundings. This jutsu can be maintained as long as the Hyuuga channels chakra to their eyes.
NinpouShow
*[Ninjutsu • Hidden Needles]
D-Ranked Ninjutsu
After performing the correct hand seals the user will focus chakra into their mouths and into up to five senbon within 10 meters of their position. The senbon will be summoned from their persons or nearby into the user's mouth, where they will be spit out aided by chakra at [Control] Strength and Speed. The senbon can be shot up to 10 meters away.
JyuukenShow
D RankShow
~Jyuuken :: Palm Dance of Divination
D-rank Nintaijutsu Maneuver
The fundamental basis of Jyuuken, the user will focus chakra into their hands. For three posts the user is able to inject the chakra within the opponent’s body upon successful contact, dealing damage to the internal structures of the body rather than the external. This has a painful effect on the muscles and blood vessels within the body, causing bruising at the touch.

~Jyuuken :: Palm Guard of Divination
D-rank Nintaijutsu Maneuver
After channelling chakra into their palm, the user will guard a strike to them. If this strike is empowered by Ninjutsu of D-rank or lower, it will guard against the effects by the user bursting their own chakra into it. Otherwise the chakra will enter the opponent’s striking appendage and damage their chakra system, causing them to lose 1 control for 4 posts.

~Jyuuken :: White Haze Dance
D-rank Nintaijutsu Maneuver
After channelling chakra into their palm, the user will strike harder than usually performed in Jyuuken. While normally the softest touch is enough to inject the chakra to damage the internal structures of the body, this technique is designed to accompany the user's attack with a blast of chakra, throwing those with a [Strength] less than the user's [Control] back 10 meters through the air.

~Jyuuken :: White Haze Dagger
D-rank Nintaijutsu Maneuver
After channelling chakra into their hand, the user will skillfully dodge an incoming strike performed with an arm. The user will then strike the place where the bicep and triceps meet on that arm, injecting their chakra between the muscles for a painful effect. The body will then have its strength reduced by 1 for 4 posts.

~Jyuuken :: Twin Striking Palm
D-rank Nintaijutsu Maneuver
Often used as a finishing strike, the user will charge chakra through their palms before they deliver the blow. They will then strike with one palm inverted over the other into the opponent’s abdomen. The chakra that is injected directly into the opponent’s solar plexus causes significant pain and stands a very large chance of winding the opponent providing their [Strength] does not exceed the user’s [Control]-5.
C RankShow
~Jyuuken :: Pricking Lock
C-rank Nintaijutsu Maneuver
Used as a method of immobilizing an opponent, the user will charge chakra into their hands before wrapping their free hand around their opponent's arms locking it in place before striking with the charged hand injecting it with chakra straight into the tenketsu temporarily locking their opponent's arm into that position. This move can be resisted if the opponent has more [Control] than the user. This arm lock lasts for 3 posts

~Jyuuken :: Void Palm Strike
C-rank Nintaijutsu Maneuver
After channelling chakra into their palm, the user will thrust their palm toward a target. This technique extends the range of their palm thrust by firing off a shell of chakra in the direction of the palm thrust, moving a speed and strength equal to the user’s [Control] moving up to 25 meters.

~Jyuuken :: Eight Divination Signs Heavenly Rotation
C-rank Nintaijutsu Maneuver
After channelling chakra through all the Tenketsu in their body, the user will begin to spin rapidly on the spot. This will cause an orb of chakra to expand from their body at [Control] speed, pushing away incoming projectiles, ninjutsu and people with [Control] strength. This technique can last a total of 2 posts, and the orb expands a maximum of 5 meters.

~Jyuuken :: Eight Divination Signs 32 Palms of the Hand
C-rank Nintaijutsu Maneuver
Prerequisite: Byakugan Active
The weakest form of Jyuuken’s Ougi, this technique combines a sharp mental image with precise strikes. The user first envisions the symbol of the eight trigrams on the ground beneath them to gauge the distance between themselves and the target with the aid of the Byakugan. The master of this technique then channels chakra into their hands and dashes in to engage with the opponent. Using their calculations and precise strikes, the user will then swiftly perform a combination of blows equalling 32 in number; each blow closing a tenketsu point. This technique causes widespread damage to internal tissues, resulting in a lot of pain and damage to the body; while the closed tenketsu reduces the target’s Control by 3 for 6 posts.
B RankShow
~Jyuuken :: Eight Divination Signs Mountain Crushing Palm Strike
B-rank Nintaijutsu Maneuver
After channelling chakra to their palm, the user will thrust it toward an opponent. They will let forth a wave of chakra on contact which spirals around and through the opponent’s body, assaulting their chakra system as well as the rest of their body. This will cause their body to suffer extensive damage to its musculature, reducing strength and speed both by 3 until medical assistance is received.
History
Historical AccountsShow
If it wasn’t for the distinctive bulging white eyes, you would believe Hato was born the son of two tea farmers, as Hato entered the world with a tea leaf hanging out of his mouth. Not literally, but the young boy early garnered a devoting affection for the hot drink made by infusing dried leaves into hot water. A simple act that becomes such a passion and focal point of Hato’s childhood, Hato would pluck the fields and bushes, collecting and identifying any different tea strain he could get his hands on. Hato quickly became a favourite among the elderly of the Hyuuga, as part of his chores he would deliver tea. It was during this time that Hato saw the happiness tea could bring to so many, and it was during this time that Hato dreamed to travel the world in search of the best tea.

During the early years of training, Hato quickly understood the connection between the calming nature of tea and the gentle fist, and how they complimented each other. The gentle fist required a calm demeanour accompanied with the elegance and fluidity of movement, and Hato utilised the various benefits of tea to calm his mind to achieve this balance. In combination with meditation and yoga, Hato became fascinated by learning the gentle fist, and discovering how different strains of tea affected his training and performance.

At the age of ten, Hato awakened the Byakugan. Throughout his daily chores of spreading the joy of tea to the elders, Hato became very friendly with an old man, Hideki Hyuuga, who shared with Hato a deep passion for tea. The man radiated a deep sense of peace and joy, and Hato resonated with his energy. The man would speak about his travels around the world, and most importantly the various teas he had sampled. It was this reason alone that Hato chose that man to accompany his rite of passage.

Hato entered the academy at age eleven, he discovered his calm nature allowed him to avoid stress during exams, and he displayed excellent chakra control as a member of the Hyuuga. Graduating at age twelve, Hato was now ready to start a new chapter in his life. Becoming a genin now gave Hato the opportunity to explore the world, and chase his dreams.