~Live in the moment~ 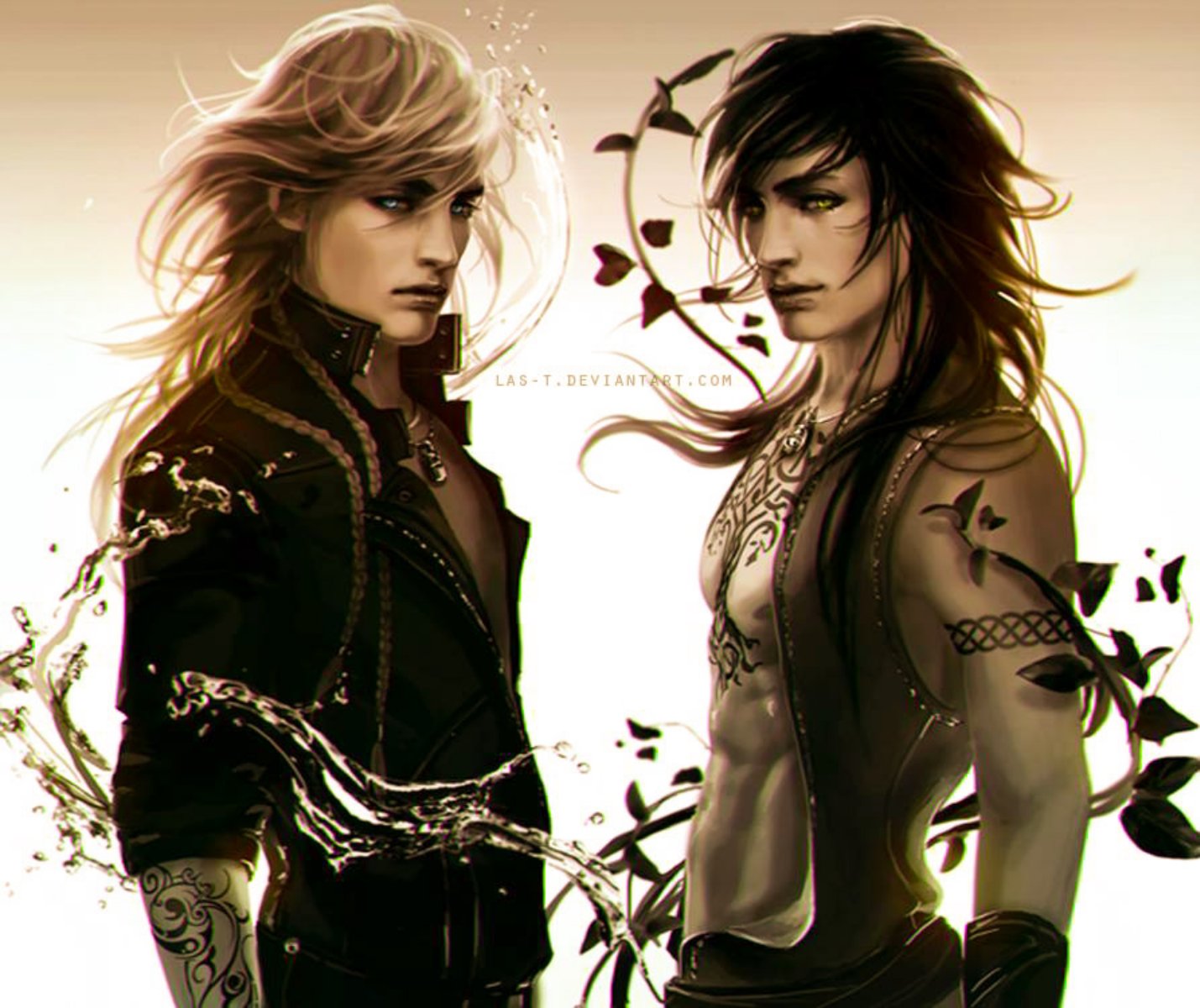 Personality: Waru is a relatively quiet and soft spoken young man. Very compassionate and caring, he hates fighting and detest violence. Unable to stand anyone being hurt, he devoted himself to the art of healing others. He dreams of a future of peace and harmony. His idealism makes him somewhat naive, yet his heart is generally in the right place. When overwhelmed by negative emotions, Waru tends to mentally shut down. He enjoys spending his time in the family's greenhouses raising plants. Due to his golden hair and noble visage, Waruhito gives off the air of a peaceful scholar. When he is in a combat situation, Waru tends to focus on non-lethal take downs, defense and healing.
Battle Information Equipment: Waru's only equipment is a pouch of 45 Jishu seeds worn on his belt.
Companions: 0/1 Abilities and Concentrations Jutsu
Flourish StyleShow
~[Flourish Style: Harvest Eye]
D-Ranked Ninjutsu
After forming the necessary hand seals, the Naegi will focus chakra into their eyes. Once this is done, their irides seem to glow from the excess chakra, making it look like small ethereal flames are smoldering from their eyes. At this level of strength, the Naegi are able to determine the health of most flora they can see. This will allow them to see if the organism is damaged, what it needs in regards to nutrients, or even what kind of care it may require. This technique is primarily used by the Naegi to determine what crops are ready for harvesting, although other applications still exist for it. In regards to length, this doujutsu will last for a number of posts dependent on the Naegi's Chakra Pool.

~[Flourish Style: Elephant Ear]
D-Ranked Ninjutsu
After forming the necessary hand seals or channeling their chakra, the Naegi will focus chakra into a Jishu seed and activate it. This seed will proceed to sprout into an elephant ear plant with leaves that all grow in such a way that they make a sort of wall. This wall is 2 meters tall and 1 meter wide, the massive leaves dropping from the plant stalk to leave no gaps. These chakra fueled plant leaves will be rigid and capable of withstanding against attacks with a Strength of [Control] or less. Katon techniques will burn through the plants with ease. The plant itself will grow with a Speed of [Control] and lasts for a total of 5 posts before withering away.

~[Flourish Style: Lavender]
D-Ranked Ninjutsu
After forming the necessary hand seals, the Naegi will focus chakra into a Jishu seed and activate it. Upon being planted, this seed will grow into a small shrub that produces tall stalks that rise above the foliage, allowing the flowers to bloom and spread their sweet aroma through the air. The aroma of these plants can spread out to 15 meters in all directions, allowing these flowers to be picked as they are are to have their aroma utilized in genjutsu.

~[Flourish Style: Jishu Plant]
D-Ranked Ninjutsu
After forming the necessary hand seals, the Naegi will focus chakra into a Jishu seed and activate it. Upon being planted, this seed will spend a solid month growing into a large bush that is capable of producing the special seeds the Naegi use. Should an advanced growth technique be used, all the seeds produced by the plant will be dead seeds that are incapable of growing into plant life. Should it be allowed to grow normally, the plant can be harvested for it's seeds that are stockpiled by the Naegi. The growth process of this plant must be monitored as it requires specially controlled conditions to grow.

Wither-Winter Sleep
D-Rank Ninjutsu
After forming the proper seals Waru is able to drain the vitality from Flourish style jutsu of his own creation. Winter Sleep causes the plant to enter a hibernation like state in which the nutrients is consolidated in the stem and roots causing outer foilage to dry up and crumble.

~[Flourish Style: Advanced Growth]
C-Ranked Ninjutsu
After performing the necessary hand seals or channeling chakra, the Naegi will focus chakra into a plant they have started growing. This will cause any produce producing plants to grow to maturation within one post. This technique will prevent that plant from producing viable fruit or vegetables and keep the Jishu Plant from giving off Jishu seeds. Instead the result is a fully grown plant that can produce rotten fruit/vegetables or dead seeds. While most would see this technique as a hindrance given it doesn't produce fruit, the rotten fruit can be utilized as a gen trigger or just a nasty projectile.

Uchinaru FlourishShow
Uchinaru Flourish is Waruhito's special Flourish Style jutsu utilizing his Uchinaru Aku plant with in his body. Uchinaru Flourish fall under the same pyramid as regular Flourish Style jutsu. Devil's Garden • Twin Vine Emergence
D-Rank Ninjutsu
Prerequisite: Flourish Style conc
After breathing and focusing on the Uchinaru within him, filling it with chakra to promote growth, two three meter thorny vines will grow out of his back. Though grown via chakra, the vines are part of his physical body and as such any damage to them will result in pain. The strength and speed of these vines match Waruhito's as they are not controlled via chakra. The vines being part of his body and utilizing it for nutrients last until trimmed off or Wither type jutsu is used.

Aqua Vitae-SuiijutsuShow
[Suiijutsu • Soothing Waters]
D-Ranked Ninjutsu
After performing the necessary hand seals, the user will generate an orb of water 6 inches in diameter. Upon contact with the ally the waters will flow towards the target's first degree burns. As the water interacts with the cells and tissues in the area, the wound will begin to repair and heal over until there's no remnant of it ever being there this treatment takes 2 post per burn the size of of a fist. Larger burns must be treated in sections. This doesn't create new cells merely rejuvenate and restore damaged ones.

[Suiijutsu • Rejuvenating Blast]
D-Ranked Ninjutsu
After performing the necessary hand seals, the user will raise a hand towards an ally. A jet of water will shoot out up to five meters and drench the target soaking them. Upon contact with the target, as the water interacts with the cells and tissues in the area, the water will stimulate the nerves, treating mild numbing and tingling from electric shock. The water must soak into the skin taking 2 post. If the water is diluted or evaporated off before then it wont take effect.
Pre-approval Jutsu 0/10Show
Placeholder
History
Historical AccountsShow
As an infant the Uchinaru Aku was planted inside the boy's body. Taking root it grew along side him quietly hidden in the shadows devouring the dark thoughts and negative emotions from the boy's heart. It wasn't until he was five years old that the effects of the Uchinaru showed itself.

During a routine spar Waruhito was refusing to injure his opponent resulting in him being on the back foot the entire battle. His opponent a bully that targeted him due to his gentle nature was taking advantage of the situation to beat up Waru. Finally cornered with an attack incoming, the Uchinaru finally revealed itself transforming Waru's body and attacking the offender with vines growing out of his back. The bully was left in a bad state, several deep lacerations and a weak poison circulating through his body.

When Waruhito discovered what became of his opponent he teared up and balled his eyes out only to be scolded by the teacher for showing weakness. After that event Waru focused his talents as a support oriented ninja, and when forced into a true fight Inou would appear and take over. Waru named his otherself and even came to view him as a sibling. It wasn't until graduation that his family told him the truth of Inou's origins. Despite the dark origins and what it meant for his own life span Waru still loved the Uchinaru as a sibling. Now he does his best to grow stronger for both of their sakes.
Top
REPLY
TOOLS
1 post • Page 1 of 1