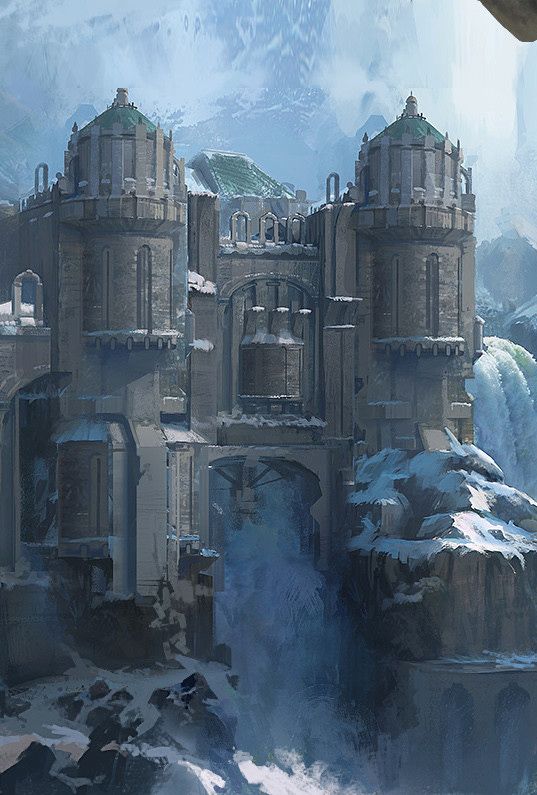 Built into the side of the mountain range surrounding Iwagakure no Sato, the Headquarters of Jousai is quite large. The building once belonged to a wealthy merchant who expanded the cellar of the building deep underground to store his wealth, perfect for the organization. The merchant eventually died of old age and his daughter inherited his wealth, leaving the mighty castle empty until it was gifted to Jousai by the Tsuchikage for defeating the Leviathan worm.

The Headquarters is a grey brick castle built into the side of the mountain range surrounding the village, giving it a great vantage point. Each corner of the castle is adorned with a large, green-topped turret. The castle is centered around its great hall, a large room equipped with long tables and benches for the men and women of Jousai to eat and gather. In the back left of the great hall is a stone spiral staircase leading up to the officers' offices, bed chambers, and a solar for the higher ranking shinobi to gather and discuss any ongoings. Double doors on either side of the great hall lead to different sections of the castle. The door to the left leads to the kitchens, pantries, larders, and other storage while the door to the right leads to the barracks for the members of Jousai along with an armory for them to store their weapons.

Descending the stone spiral staircase leads one into the brightly lit basement which had been modified to contain a large training space for the organizations' members. The staircase descends down another sub level, this time bringing one to a long corridor that ends at a dead end. The dead end links to the elevator designed at the first entrance to the Catacombs, the floor of this space also covered in similar fuuinjutsu and manned by two Iwagakure chuunin.

List of rooms: The Ninomaru Division Leader: Shared Enkouten, Mitsuo and Akari, Tatsuo
The Ninomaru are individuals tasked with strengthening the outer defenses of Iwagakure. Primarily, the Ninomaru are responsible for enhancing the physical security of the village's outer defenses, often specializing in defensive and trap style jutsu which they use to build upon the village's current defenses to prevent and deter threats. Additionally, they are tasked with creating and maintaining relationships with the villages and tribes in the surrounding provinces so as to create a widespread information network. Typical missions of this division include: The Honmaru Division Leader: Enkouten, Mitsuo
The Honmaru are individuals tasked with strengthening the inner defenses of Iwagakure. Primarily, they are responsible for the enhancing the inner security of the village and maintaining order, often specializing in various technique that are designed to capture, trap, or disable a target or defend an individual within their care. They act as the last line of defense for the village should its outer defenses be broken. Additionally, this division is responsible for patrolling and investigating the Catacombs beneath the village, monitoring the creatures that live within them and preventing them from surfacing in the village. Typical missions of this division include: The Chigatana Division Leader: Akari, Tatsuo

The Chigatana are individuals tasked with some of the most sensitive of missions within the organization, operating almost entirely in secret. Members of the Chigatana are often tasked with handling the 'dirty work' associated with a village defense organization, traveling the country itself to perform duties that are deemed necessary to eliminate threats to the village. They are a relatively unknown division of Jousai with few members of the other divisions even knowing of its existence. For this reason, members of this division often act as members of one of the other divisions as cover while secretly performing missions for the Chigatana. Typical missions of this division include: Requirements General Requirements Ninomaru Requirements Honmaru Chigatana Plotboard Tracker
This keeps track of all the PBs completed under the Org, those marked as being used as payment have an asterisk along with the name of the reward given(*) Organization Unlocks
Personal Unlocks
[Resources Spent: 12 of 26]
7 Resources: Dynamic NPCs (Up to A-Rank/No Limit)
5 Resources: Main Base