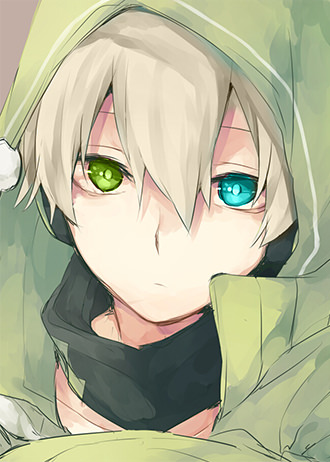 [/center] General Information Age: 13
Gender: Male
Height: 5'1
Weight: 247 lbs
Physical Features: As Ayato is still a prepubescent child, he has a boyish appearance and a petite body with fair skin to match. His hair is a straight long sandy blonde. His bangs parts to reveal his eyes--one sapphire and one emerald, which almost seem to glow with how vibrant the irises are. Because of his distinct case of heterochromia, Ayato is very easy to pick apart from a crowd. Interestingly enough, due to his dragon physiology, Ayato's skeletal structure is incredibly dense and as such he is much heavier than one would expect.
Clothing/Accessories: Ayato wears a long-draping olive-green hooded parka at all times. Underneath that, he wears a black turtle-neck short sleeved shirt, black shorts, and does not wear shoes. This outfit is Ayato's only set of clothes, and he is never seen wearing anything else.
Personality: Still young in the ways of the world, Ayato's personality is best described as naive but curious. With an inquisitive nature that often leads him into trouble, he's always learning from his mistakes. Although he doesn't have any outstanding dreams for the future, his one hope is that he would be able to meet his mother one day. Ayato is an altruistic person for the most part, and if he sees someone in trouble he won't think twice or hesitate to help them. This is mostly fueled by his desire to create bonds and friendships with others, as he's an outgoing child with a bright spirit. Consequently, his greatest fear is being rejected by others; because he's an orphan who doesn't know his family, Ayato holds the bonds he creates dear to him, and always gives an effort to maintain his friendships. His childish nature often shows through multiple facets of his personality: his unsolicited trust for strangers, his unrealistically optimistic outlook on the world, and best of all--the fact that he finds just about anything hilarious.

In combat, Ayato is instinctive at best. He has never been trained formally in the art of combat, and it shows often through clumsy mistakes. Battle Information Village: Knowledge Country
Rank: C-Rank
Equipment: Companions: (0/1)
Affinity: Katon Abilities and Concentrations Jutsu Ayato currently knows no jutsu. History
Historical AccountsShow
Born in a cave in the mysterious Knowledge Country, Ayato would grow up not knowing his origins.

His mother was a Dragon Priestess who worshiped the Dragon God Ryūjin, who in turn blessed her with a child in her womb. Although this was not the first recorded case in which Ryūjin had granted blessings to mortals, this was the first ever recorded case of a child being born in such a way. Ayato's mother died giving birth to him due to the sheer amount of power that was unleashed when he entered the world, and Ayato was later taken in by a group of scientists that found him in the cave.

Ayato grew up in a healthy environment. The scientists who took him in nurtured him and took good care of him in a humane fashion. This was not to say that the main reason they did so was to research his genes, but all in all he lived a happy childhood. Despite this fact, he was never told who his parents were, and to this day he remains in the misconception that his mother is still alive and well, somewhere outside of Knowledge Country. To add to that, he was also never told that he was a dragon, and research done on him was passed off as 'regular tests for kids'--something which he never bothered to question.

Because of the vast amount of unexplored land in Knowledge Country, Ayato often spent his time assisting the researchers he lived with, and learning things about the world through both the scientists and the excavations he participated in. Such a life was peaceful, tame, and above all: comfortable. But such a life was not the same without a true family--Ayato longed to find his mother, so that he would be able to feel like a normal child. Thus, he 'ran away from home' on a whim one night, and set off to venture the world in search of his mother.

Little would he know, the world had nothing of the sort to offer him.
Top
REPLY
TOOLS
1 post • Page 1 of 1