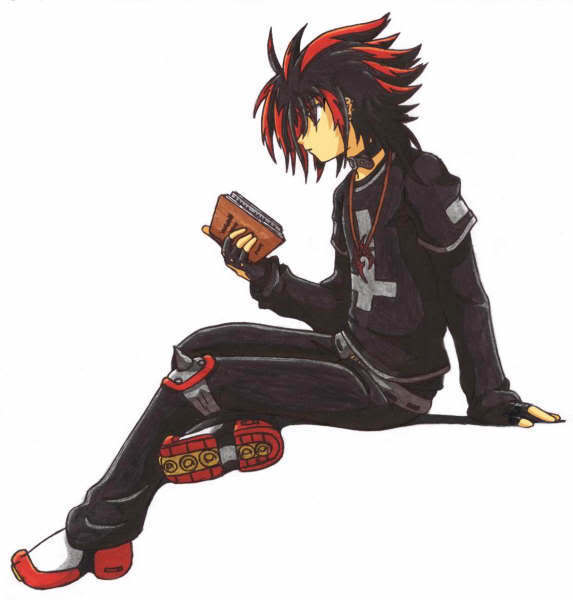 Clothing/Accessories: Clothing wise, Kumori often opts for full coverage of his body with dark colored clothes. Although his attire is subject to change depending on the event at hand, he usually interchanges between a main, day to day and combat outfit, and a more casual one. His primary choice of attire consists of a plain, long sleeve, solid black shirt that is only slightly oversized, surpassing his wrists and ending at the first joint of his thumbs, just before they meet the webbing to his index finger. This is the most basic garment of clothing, being a cotton and polyester blend. Over this, he wears a lightweight, short sleeve shirt that is also black though with grey stitching and design. The collar, cuffs, and waist are lined with grey, with two grey patches on either short sleeve. In the center from just under the collar, leading down to the lower middle of his abdomen, his an inverted crucifix resembling design. This is simply stitching and bears no symbolic representation. Around his throat in choker fashion, is a thin black strap, with a small plate bearing the Iwagakure symbol. Also tied around his neck, in a more necklace fashion, is a string tied through a wooden pendant whittled into the symbol of the Fukusha clan. Matching the dark design of the top half of his attire, he wears standard issue shinobi bottoms. Though they fit and sit on his waist, the waist itself is hemmed with a grey waistband with black threads poking out in a dash pattern. This allows for adjustment. Attached to his left knee, bound by a grey strap, is a knee guard of sorts. The pad itself is of a red material, attached to which is a spike made of the same metal as kunai and shuriken, held into place by four studs in each of the four corners of the pad. Upon his feet are an unorthodox in appearance style of shoe in comparison to standard issue shinobi footwear. The shoe itself is closed toe, with a white base, and red heel, sole, and bottom lining. There is a black line in the shoe separating the heel from the front end of the shoe. The bottom of the shoe itself is in red square segments with a yellow stripe down the middle filled with circular segments. Right before the heel is an indent which is black and white in color. He also wears black, fingerless gloves with a small rectangular cut out on the back of the hand, opposite of the palm. Kumori’s more casual attire consists of a similarly styled black shirt with short sleeves and grey lining the cuffs, collar, and waist, though the crucifix on the front of the shirt is replaced by a simple grey stripe. In this setting he still wears all of his accessories, including his choker bearing the small Iwagakure plate and Fukusha necklace, along with his signature shoe, spiked knee pad, and his gloves. The only difference is in the clothing article themselves, albeit slight. Replacing the long sleeve undershirt is the short sleeve one described, and over this is solid grey button up shirt, though Kumori rarely buttons it, opting for a more loose and casual style. Aside from this, the only difference in his casual attire are a slightly more loose pair of black pants, requiring a belt that resembles the waistline of his Shinobi pants. This grey belt is quite long, wrapping around his waist twice and adding an extra strap to the standard appearance of a belt. These two outfits are Kumori’s go to, however during clan ceremonies he opts for a traditional black and white kimono with the Fukusha crest on the back of it.
Personality: Battle Information Village: Iwagakure no Sato.