Physical Features: Clothing/Accessories: Hiro's casual wear obviously changes day to day and is affected by weather, temperature, and mood. However, he commonly prefers warmer or neutral colors that work with his unique hair color. He can be found wearing comfortable clothing like hoodies or tank tops in colors such as brown, white, or gold. For footwear he will often wear the common sandals commonly found among shinobi. Hiro isn't one for earrings or other accessories and tends to shy away from that sort of thing both when on the job or off it.

When on a mission or training Hiro sticks with the same outfit, easier to replace that way when it inevitably gets worn out. A black shirt acts as his top. The back of the shirt drags down further ending in tails like that of a tuxedo. Over the shirt is a small caplet that frays in the back and comes down mid chest. Hiro wears a single steel armguard on his left arm which covers the back of his hand to his elbow, a white fingerless glove is also worn on that hand. A beige obi serves as a contrast and break between his black top and black bottoms. The obi is held in place by a white sash that is lost at the back behind the tails of his shirt. His black pants end just at the knee where knee high sandals finish the ensemble. These too are black to match the rest of his outfit. All in all it is a rather monochrome outfit that serves to bring out his more colorful hair and eyes. 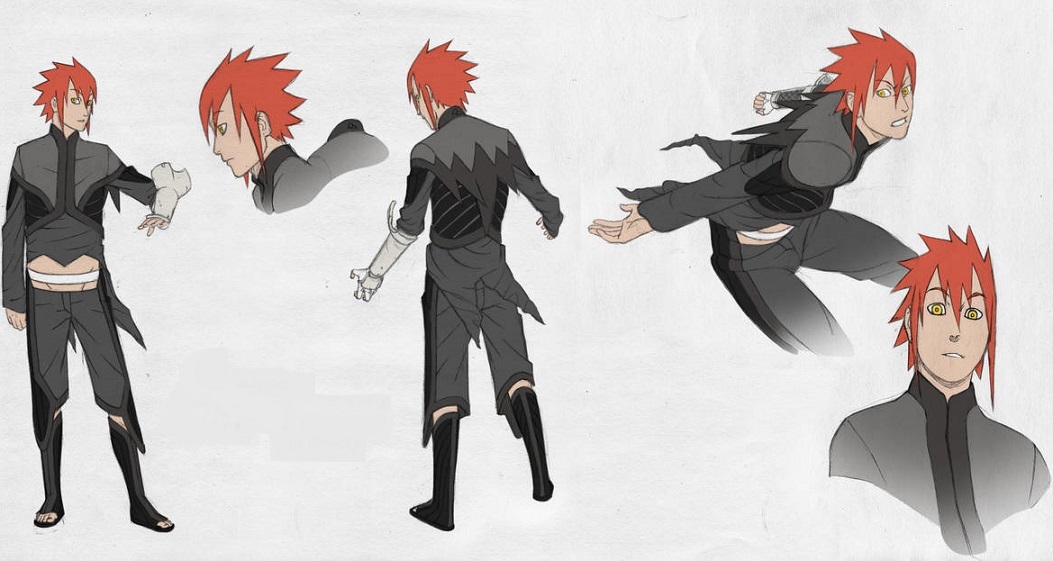 Personality: Battle Information Village: Iwagakure no Sato
Rank: Genin Equipment: Companions: (0/1)
Primary Affinity: Youton Abilities and Concentrations Jutsu
NinjutsuShow
NinpouShow
*[Ninjutsu • Tracking Device]
D-Ranked Ninjutsu
After performing the correct hand seals the user will coat one of their hairs in chakra. Once this has been done, they will place it on their target. The user can track the exact location of the strand of hair for up to 7 meters. For up to twenty meters out, the user can track a rough location. From then out to 100 meters, the user just gets a general idea of where the opponent is. The chakra in the hair will dissipate at the end of 6 posts.
DotonShow
*Doton • Binding Formation
D-Rank Ninjutsu
After channeling doton chakra into their foot the user will slam the ground within 3 meters of a target's feet with their heel, causing a formation of rock to shoot upwards at a speed of 6 binding the target's feet at a strength of 4.

*Doton • Dirt Cloud
D-Rank Ninjutsu
After performing the correct hand seals the user will form a 1 meter diameter ball of loose dirt in front of them, launching it off up to 10 meters away at a strength of 4 and speed of 6. Upon impact the ball of loose dirt breaks apart forming a vision-impairing cloud of dirt with a 3 meter radius.

*Doton • Wall
D-Rank Ninjutsu
After performing the correct hand seals the user will form a solid stone wall up to 5 meters away from them at a speed of 6. The wall has a strength of 4 and is 3x3x1 meters large.

*Doton • Tremors
C-Rank Ninjutsu
After performing the correct hand seals and holding the last one, the user will stomp their foot on the ground, releasing their chakra in it and causing it to tremor violently for one post. The tremors radiate out from the user in a 10 meter radius, knocking down anyone standing on the ground with less than 10 taijutsu. Lasts as long as the last seal is held, for up to 3 posts.
YoutonShow
*Youton • Kick Up
D-rank Ninjutsu
After performing a string of handseals, the user will kick one of their legs at the ground, skimming their foot just over the surfrace of the earth. Chakra at the bottom of the foot converts the ground into lava, splashing forward up to 5m with a speed equal to the strength of the user and an impact strength of 5.

*Youton • Burst Punch
D-rank Ninjutsu
After performing a string of handseals, the user will focus chakra into one of their fists before punching forward. This causes a burst of lava to leap forward from the fist with a speed equal to the strength of the user and an impact strength of 5.

*Youton • Minor Trap
D-rank Ninjutsu
After performing a string of handseals, the user will focus chakra into the ground through their feet. This infuses the ground with Youton chakra, creating a circular trap with a radius of 5m with the user at the center. If someone aside from the user were to step within the range, lava would burst upwards with a speed of 1 and an impact strength of 9.

*Youton • Minor Eruption
D-rank Ninjutsu
After performing a string of handseals, the user will cover the surface of their body with Youton chakra. Physical contact witht he user triggers the technique, causing lava to burst outwards from the point of contact with a speed of 1 and an impact strength of 9. This jutsu causes 1st degree burns. The lava hardens over the span of 3 posts, reducing the strength of impacted objects by 2 strength per post. The jutsu lasts until triggered or for 3 posts, at which point it dissipates harmlessly.

*Youton • Lava Burst
D-rank Ninjutsu
After performing a string of handseals, the user thrusts their hands forward, causing lava to burst from the ground 1m forward. The lava then moves forward up to 5m with a speed of 5 and an impact strength of 5.

*Youton • Improved Trap
C-rank Ninjutsu
After performing a string of handseals, the user will focus chakra into the ground through their feet. This infuses the ground with Youton chakra, creating a circular trap with a radius of 10m with the user at the center. If someone aside from the user were to step within the range, lava would burst upwards with a speed of 5 and an impact strength of 15.
TaijutsuShow
TBD
GenjutsuShow
TBD
History
Historical AccountsShow
Hiro was born to your typical Enkouten Clan family. He was the youngest child with two older siblings and both parents. Like many of the Clan all immediate family members are either career shinobi or perform a trade commonly found among the Enkouten. Namely his older brother, whom showed no talent for Chakra molding, is a blacksmith. As is the law Hiro was enrolled into the academy where he was found to have an ability to mold Chakra and thus was cleared to learn the art of the shinobi. It was during this time that Hiro began to show signs that he was not a typical Enkouten, certainly not one the Clan typically approved of.

The signs actually were visible before then, had people been looking closely. Perhaps it was a byproduct of the peaceful time the Village had been experiencing, perhaps it was simply who Hiro is. However, even during his time in the Academy Hiro was clearly cut from a different cloth. Although he loved his village, he seemed immune to the indoctrination that was part of the compulsory education. He lacked the pride and intense work ethic commonly found amongst his Clan. For Hiro he just wanted to enjoy his daily life and take things one day at a time. It resulted in a certain level of averageness from the boy. Whether it was in his studies, his training, or what was expected of him from the Clan to survive on his own. Hiro always did just what was expected of him, no more, no less. As a child it saved him from having to enter the ring with his eldest sister, but as he grew older and his work ethic continued to stagnate he was subject to more and more educational beatings.

Eventually, he graduated from the Academy and was given the choice to pick up a craft or continue on as a Genin. Had he been a member of any other Clan perhaps they would have allowed him to take up a craft, but he was an Enkouten. The only excuse to not graduate and become a Genin would have been evidence that he had no ability with Chakra. Since he had, he was given no choice in the matter. As a Genin very little changed for Hiro. His stubborn ideals to take things easy meant he took what missions were expected of him, but didn’t really try to advance himself further. His family did what they could to punish, train, and enforce the strict belief systems of the Clan. However, he always seemed to bounce back to his usual mood no matter what they did. By the last two years his family had all, but given up. They were concerned that shining any more light on his inadequacies would further besmirch the honor of the Enkouten. They had opted to simply ignore him, in the hopes that by doing so he would float under the radar. The break was much appreciated and allowed Hiro to slack off even further.

Eventually, it was not the rough hands of his sister that changed his ideals. It was not the pride that his Clan was renowned for. Nor did he find himself stricken by on overpowering sense of loyalty that so many of the Village hold. Of all things, it was a festival. The festival shared with Kirigakure to celebrate their alliance, in fact. Although, there is still an air of reservation for the other Village the festival was a success. Hiro was there and seeing the smiling faces, filled Hiro with a sense of purpose. Life wasn’t terrible for citizens within Iwagakure, but for the terribly poor it wasn’t a bed of roses either. Wouldn’t it be nice if everyone in Iwagakure was as happy and felt as secure as they did on the day of the festival? Wouldn’t it be great if people could hold just a fraction of his own ideals? However, as he was now he could affect no change. So he swore to himself that he would grow stronger, would advance as a shinobi. In doing so, he could serve as a mirror to the standard. He could be a role model and perhaps while doing so accomplish enough good to bring that joy to the people of Iwagakure. He knows he has a lot of work ahead of him and for once he is excited about that.
Top
REPLY
TOOLS
1 post • Page 1 of 1