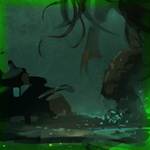 It had been almost a week since Shizune had left her house. With plenty of dried food and preserves stocked up, she had no reason to. Instead, she stayed in her house and passed the time conceptualizing new jutsu, exercising, training what she could in such a confined space, and tinkering with her gear. It's all she had anymore; the mission. The next task, the next job, the next order. It was her life, one of the few things keeping her sane ever since her defeat and interrogation at the hands of Kiri. Her house, once colorful and bright, was now muted and dark. And aside from the sound of her movements and breathing, there wasn't a sound in the house.

The front door was unlocked, but her curtains were drawn. She sat in her living room, a litany of tools on the table, just... checking over them. Again, and again, and again. A paper full of jutsu concepts sat on the other end of the table. The house itself was a bit of a wreck, stuff strewn all about the floor and dust collecting on the furniture. The only light in the house was a single lamp in the corner of the living room. This was the scene that Shizune's friend would walk into, as she sat in silence perusing her various shinobi related things.

Etsuko made her way through the village. She hadn't heard from Shizune in awhile and made her way to the woman's home to try and figure out if she was okay. At first she had thought she would find her at the Jinsai compound, but that quickly proved to be wrong. When she went to the compound she found out rather quickly that Shizune didn't live there anymore. It took her a bit of time to find out where she lived, but once she found out, it wasn't exactly hard to track down. It was like trying to find the most depressing and darkest living space in Kumo.

It was like looking for the brightest sign in the village, just the opposite. She found it rather quickly and didn't even bother knocking. She pushed the door open and walked in, immediately starting to move about the house and opening windows. She pulled curtains open and started letting the light in, dusting things off as she went and even coughing as it unleashed a few dust bunnies here and there. "I swear, I need to hire you a cleaner or something, Shizune." she was saying with a heavy sigh.

Once she had finished opening windows she moved to where Shizune was sitting and smirked at the woman, reaching over to pinch her on the arm. "I think I should drag you out for a bite to eat or something. When's the last time you had a decent bite?"

Shizune heard the door open, and rather than look for a weapon or some means of defending herself against assault, her hand immediately darted for her black leather mask. A second later, the mask was fastened behind her head, and she turned to see that it was... Etsuko. She wanted to be mad, but she couldn't, even as the woman started pulling open curtains and blinding her with outside light. She moaned with pain as the light poured in, holding a hand in front of her eyes as she struggled to see. "Gah... No cleaners. I'll get to it myself... Eventually." The thought of some random person moving through her house was even worse than Etsuko, she didn't need anyone judging her for the way she lived.

Finally, she walked over and pinched Shizune, causing her to wince with a little bit of pain. "I... just ate some bread a few hours ago. And some dried meat." She rubbed her arm with slight embarrassment, looking away towards the wall as she spoke. She knew full well Etsuko wouldn't consider that a "decent bite", but she also dreaded leaving the house. Etsuko was practically the only person that could treat her like this, dragging her out of the house and forcing her to be human again. In a way it annoyed her... but she also appreciated the small bit of human contact with her. She hated to admit it, but she was definitely feeling lonely...

Etsuko rolled her eyes as Shizune claimed she'd clean it up herself. "If it isn't done soon I'm just going to do it then." she insisted with a heavy sigh. After pinching at Shizune she suddenly leaned over the woman and looked at her a moment before kissing her on the lips of her mask and then her forehead. She reached out and touched her under the chin to force her to look up at her. "If you won't take care of yourself then I guess I have to." she insisted, leaning down to touch her cheek against Shizune's cheek before suddenly kissing against the woman's bare neck and standing up straight with a sigh.

"Now come on. We're getting a bite to eat and I have a present for you." she proclaimed, putting a hand under Shizune's arm and practically lifting her out of seat to get her to her feet. It was only then that she released her and walked to the door, turning to look at her as she waited. "And you're not getting your present until you eat dessert so... come on."